Foundation on Curating, Organizing and Advising in Urban Interventions and Events. 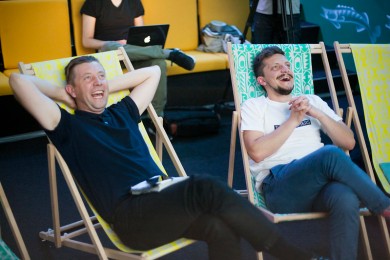 During the exhibition #ViralVandals, curated by Jasper van Es and GoodGuyBoris in artspace MU, we organized a talk in the Student Hotel Eindhoven during the Emoves Festival.

#ViralVandals is an exhibition about the second life of graffiti. Thanks to social media, graffiti writers have gained an extra infinite public space that is being used extensively. Going virtually viral replaces the street in the quest for even greater visibility. New forms of expression emerge and the DNA of the scene changes irreversibly. Also, techniques like virtual and augmented reality are within reach, which can be used to add an extra visual layer to reality.

During #ViralVandalsTalks host Isolde Hallensleben will discuss the future of graffiti at the crossroad of the real and virtual world. Local and international movers and shakers from the scene will be our guests, with amongst others: RJ Rushmore (author Viral Art), Good Guy Boris (The Grifters), Matthieu Tremblin, and Mick La Rock.

Photo’s of the event can be found here.